Some of my family members live in Australia and a few days ago we met up with my cousin. It was great, I hadn’t seen her in forever and I don’t know, there’s something interesting about being related. You’re something of the other person, you’re their someone, so you have this bond. Anyway, Robin and I intend to go to India later this year and she had travelled there by herself so we were interested in her experiences. She loved it there, loved the food, had a great time.

I was a bit apprehensive about how I would be treated there as a somewhat young travelling woman, but she managed to reassure me. “Yeah you get remarks from men. One time a guy followed me around on a boat, asking sexual questions. A taxi driver scolded me for not dressing modestly enough”. We both shrugged, and said at almost the same time “you get that everywhere you go”.

And Robin did “whaaaaaaat?!”.

A few days later we were at a touristy thingy when I tried to read an information sign. An older man started mansplaining stuff to me, asking me if I understood English (’cause he’d heard Robin and I speak Dutch) and remarked “you know, this architect’s wife was really smart. She went to school!”. I smiled politely, not much you can do when an older ‘gentleman’ goes all creepy grandpa on you so I just ignored him. “I can’t believe how condescending he was!” Robin remarked later. “Sweety, I get that everywhere I go”.

And Robin did “whaaaaaat?!”.

I mean, Robin is not blind. He’s not a stupid guy either. But when you’re not living in it, it’s easy to be blind to sexism. You just don’t see it. As a white, cis-gendered, hetero-partnered person I’m used to being one of the ‘us’. I’m used to seeing ‘myself’ on television, of feeling represented by the main characters in tv shows, of the news being viewed from my perspective.

And then there’s a ‘Dutch person’ on Gilmore Girls and you get a glimpse of what it’s like to be othered. When I saw that episode I went all “whaaaaat?!”.

I was having coffee with a sex worker when a Taylor Swift song came on. “Oh, I just love her” she said. “So classy, not like some other young artists who use their sexuality to make money”. I’m afraid the irony was lost on her, but it shows how deep our cultural aversion to sex really goes. Even sex workers don’t like women who sell sex. 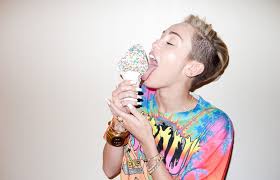 I first noticed Miley Cyrus when she got a short haircut and the internet exploded. We’d seen Britney Spears shave her hair when she went through a rough time, and my heart went out to her then. Just imagine being Britney, the pressure to be this perfect, girly, virgin, sexy little girl-woman, the world’s madonna-whore complex dumped on your shoulders, I think I’d crack in a day. But it was different with Miley. It felt like a statement, it felt like navigating, it felt like she was shedding the image and trying to become herself.

Miley gets hated on because she shows what we fear most: female sexuality. Active, explicit, in-your-face sexuality. Women are expected to be passive and receptive. Sexy, not sexual. A woman’s worth is still decided based on her modesty, even the quality of our culture is measured by how well-behaved ‘our women’ are. Sexual women are seen as a sign of decline.

And lately Miley Cyrus has identified as gender-neutral, as fluid-sexual, using her fame to actually help people who are in a less privileged than herself, and I’m a fangirl. I mean no, using black women as props is not acceptable. But among all the long-haired, pink-cheeked, virginity-saving, boner-arousing ‘girl next door’ types she’s… I don’t know. I’m loving seeing a young woman publicly figuring out who she is, coming into herself, navigating the bullshit thrown at her.

And she can sing!

In Dutch there is an old-fashioned habit of adding the letter ‘e’ to words when they refer to women. More than once I’ve had to ask people to stop calling me “psychologe” and instead just use the gender-neutral term “psycholoog”. And I don’t appreciate it when my colleagues refer to me as ‘collegaatje’ either, which means little colleague. This habit of adding ‘tje’ to everything is typically used by women, and It makes everything in their life sound cute and tiny. They’ll have a ‘wijntje’ (little wine) with their ‘vriendinnetje’ (little female friend) and leave their ‘autootje’ (little car) at home. It’s as if their world is a dollhouse.

I believe the way we use language influences how we think about people, and I try my best to be politically correct because I know my words can cause harm. Precise wording matters, we need to use proper terms and stop ourselves from using stereotype-affirming wording. It’s a problem when sex workers are continuously called ‘girls’ or in Dutch even ‘little girls’ (meisjes), because it feeds this widespread feeling that sex workers are fragile kittens in need of our help and rescue. It’s a problem when policy makers call victims of forced prostitution ‘ex-prostitutes’, because ex-prostitutes are not always victims and victims are certainly not always ex-prostitutes. Many victims want to do sex work, and most ex-sex workers simply changed careers. We need to use accurate terms because this carelessness is causing confusion, it feeds stereotypes and creates more discrimination.

I can be a pain in the ass. You really don’t make friends when you’re always nit-picking about these ‘details’, if you’re constantly correcting people (“no, not little girls. Adult sex workers are men and women”) and often, people don’t see why it matters so much. And it doesn’t in every individual case, one person calling a sex worker a little girl harms no one, it’s the structural habit that’s a problem. But I think we can change that one person at a time. So I have these conversations a lot:

Them: Ha ha, HOMO!
Me: I don’t appreciate it when you use homo as an insult.
Them: Oh I didn’t mean it that way it’s just a joke.
Me: It’s not nice for us gay people when that word is used like that, it’s kind of hurtful you know? I know you didn’t mean it that way but I’d appreciate it if you stopped using homo as an insult.
Them: Yeah okay, don’t make a big deal out of it.
Me: Thanks.

But I think we can go too far. Or rather, that we can get confused over what the actual problem is. In some circles, politically correct language has become a goal in itself rather than a tool to reach equality and equal rights. People who are unaware of how language influences everything and use, for example, sexist language are suddenly seen as the problem, the enemy, instead of just a part of a structural problem in how society views (for example) women. Even for someone like me, with a good education and plenty of exposure to gender theories, sex work rights activism, sex positive activism and other subcultures with a lot of emphasis on correct language, it can sometimes feel like you’re walking on eggshells. Or rather, stepping through a mine-field and you never know when the next PC-bomb goes off.

Remember when Dan Savage got hated on because he talked about the problems with the word ‘tranny’ and he shouldn’t have said tranny even when he’s talking about why you shouldn’t say tranny because tranny is hurtful and he should have said t-slur instead? Holy hell, I just wanted to have a big fat wijntje with one of my vriendinnetjes when I read that…

I’ve seen the PC-policing go bad more than once and really agreed with Fredrik deBoer in his essay “I don’t know what to do, you guys“. I’ve backed out of plenty of debates on trans activism and other sensitive topics because it just all got so hostile so very quick, and the hostility was aimed at well-meaning potential allies who had no idea what kind of shit they stirred up when they unknowingly used a slur. It’s different when someone continues to use slurs after they’ve been informed why it’s a problem, then it becomes hate speech. But often, it’s ignorance rather than bad intentions.

Maybe it’s not your responsibility to educate others. But maybe it is your responsibility to not scare every potential ally away, because like careless language, it harms our final goals, which is a world where we are all treated as equals, where we all have the same rights. You don’t have to educate anyone, but don’t stop us from educating others by scaring our allies away. Because that is hurting us.

Domestic abuse is always horrible, and I’m so glad we’re startng to create more awareness and understanding, and providing more resources for victims. But thanks to deeply sexist views on the differences between men and women, male victims of abuse don’t always get the support they need.