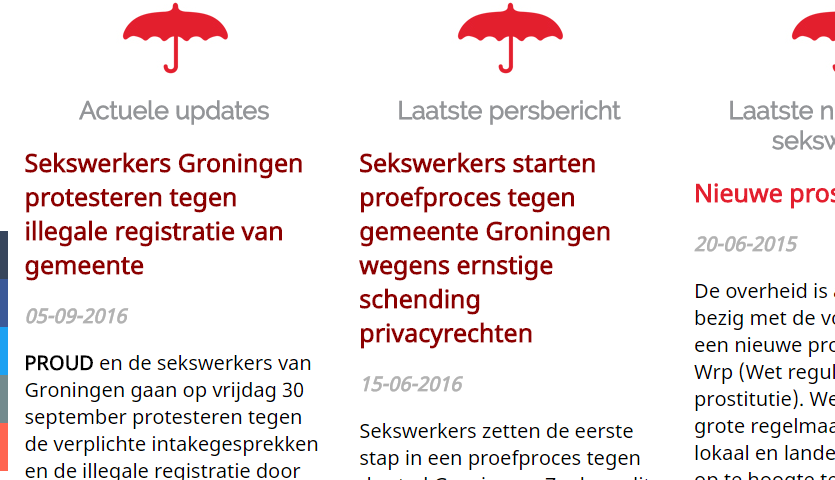 The mandatory intake is illegal, stigmatizing and humiliating. It has serious consequences, including profiling by the police and discrimination by the authorities. In addition, the mandatory intake can also be potentially dangerous for foreign sex workers and/or sex workers that still live abroad, as sex work is not legal everywhere.

Police in the Netherlands have informed families of sex workers about their profession, they enter homes without a proper warrant, they take money from sex workers without their consent and ask prostitutes invasive and humiliating questions. Sex workers need to be protected from human rights violations and state and police violence.

Sex workers will leave Groningen, have done this already or will choose to work illegally. Illegal working sex workers have no acces to the legal system, thereby being at greater risk of experiencing violence.

The sex workers of Groningen and PROUD want the city of Groningen to reconsider its policy and stop the mandatory intake and illegal registration. Please support Dutch sex workers by signing their petition.

I’m not a fan of Anita Sarkeesian. I mean, obviously I was on her side when her discussion of sexist stereotypes in computer games resulted in people sending her rape threats. It’s crazy that even talking about feminist issues can still be so dangerous, and in the grand scheme of things I’m on her team. But she calls sex workers ‘prostituted women’, a degrading term used by radical feminists to deny their agency. And as far as I know she has not yet responded to the many sex workers who have let her know that term is offensive and hurtful, which is such a crappy but typical thing to do for radfems.. Talk about sex workers, claim you want to help them, but do everything you can to ignore them and not give a damn about their wishes. Meh.

Anyway, her latest video is about butts. I thought it was good.

It’s ‘SEX WORKER’, Anita! Get with the program so I can be your fangirl!

Lt. Bill Young of the Las Vegas Metro Police declared, “You get up in a penthouse at Caesar’s Palace with six naked women frolicking in the room and then say: ‘Hey, baby, you’re busted!’ That’s fun.”

Ronald Weitzer is one of the biggest names in sex work research, and his article ‘New directions in research on prostitution‘ from 2005 is one that is very often cited in sex work debates. He’s published quite an impressive collection of books, studies and articles actually. Really cool. Oh and he works as a professor at George Washington University. Imagine having him as a teacher, how awesome would that be.

Anyway, a little information on scientific publications. Some articles report on a specific study done by that researcher. For example, last week I discussed the article by Wismeijer where the research team itself had contacted research subjects, administered tests and interpreted the data, and the article intends to present those findings to the world. But that’s not the only type of article that gets published in scientific journals. Another type of article is the review article, which does not cover original research but instead tries to make sense of a whole collection of already published articles. This is good for a variety of reasons:

So Ronald Weitzer begins by explaining why the dominant theory on sex work, radical feminism, is inadequate. Radical feminism starts with an obvious anti-prostitution agenda, which defines all forms of sex work as sexual violence. You can’t really investigate if sex work is violence if you consider all sex work violence because then obviously you’re going to find sexual violence because that’s how you define sex work and you’re not exactly investigating anything now are you. Other problems with this theory is that it is blind to any variation in prostitution experiences, it’s completely a-historic and makes generalising, essentialist claims that are not at all supported by evidence. It denies any agency of sex workers except when they leave the sex industry and uses a language that does not seem to be fitting. For example, radical feminists use the term ‘prostituted woman’ when prostitutes almost unanimously prefer ‘sex worker’. We need a more sophisticated, comprehensive model of prostitution.

Almost all research is done on the least prevalent form of prostitution: street prostitution. These findings are then often generalised to all forms of sex work and that’s a bit of a problem, because it seems the prostitution market is very segmented between indoor and outdoor workers.

And the list of wonderful happy findings goes on and on. But street-based sex workers, especially when they have drug-related problems, aren’t doing as well. And that’s an important finding, because that means that we have to figure out what’s going on with street workers. It’s obviously not the sex work itself that’s doing the harm, so how can we understand these findings in a broader context?

Almost all research is done on female prostitutes, while male and transgender sex workers are often overlooked. What research so far suggests:

Customers are by far the largest group in the sex work industry, but are rarely studied. Research so far has suggested:

Not all prostitution is organised by third parties, for example independent escorts and street workers often work by themselves. But a lot of sex workers do have someone who has some control over their work and extracts some of their earnings, they have some form of management. People familiar with the sex industry will probably think of (often female) managers of brothels, but there’s hardly any research on these managers and the little we have is usually done on (often incarcerated) street-level management, a.k.a. pimps.

This is not covered in the article, but it’s important to note that the term ‘pimp’ is an extremely stereotypical and racist term. We all ‘know’ what a pimp is: a black man with lots of bling bling who beats his ‘bitches’ when they don’t make enough money. Research mirrors this.

Studies so far suggest that street-level management (pimps) are often abusive towards workers. They offer very little protection, but become violent when one of their workers talk to another pimp. On the other hand, findings suggest that indoor workers are often very happy with their management. There is very little known about sex trafficking, partly because trafficking and voluntary migration to do sex work are so often lumped together.

Much more research is needed on the dynamics of recruitment, socialization, surveillance, exploitation, coercion, and trafficking. Such findings will help to provide a more elaborate model of varying power relations in prostitution, ranging from those types where workers experience extreme domination by managers to those where workers experience little exploitation and no coercion. (page 229)

Almost all research has been done on female street workers, arguably one of the absolute smallest groups in the sex industry. This has resulted in a distorted and unbalanced picture. We need more research on indoor workers, male and transgender workers, customers and managers.

Additional research in these areas will also have important theoretical implications, allowing for the development of more sophisticated theories that avoid the pitfalls of one-dimensional perspectives like radical feminism.

I think this is a really lovely video, Inside Australia’s largest brothel. It seems sex workers can sometimes become defensive about their jobs because there is already so much negativity and stereotyping, so I enjoyed hearing these women talk about the negative sides of their job in such an open way. The interviewer obviously did something right :). Also, it shows yet again that men don’t “buy a piece of meat” or “a hole to fuck” but instead are looking for a connection, intimacy and to be accepted and seen. Australia has regulated sex work in most states which seems to work quite well – I’m hearing a lot of positive stories from working women here. Punishing consensual sex between adult simply should not be an option.

So, making it illegal for a woman to sell sex to a man, but ok to give it to him for free is someone’s idea of fighting patriarchy? Really?

The idea that sex is something a woman gives to a man, and a man takes from a woman, is of course very problematic. But when we’re talking about sex work it is often suggested that a sex worker does what a non-sex worker does for free, and I could not disagree more. Some even call non-sex workers ‘amateurs’ and say they can’t understand why you’d have sex for free if you can get paid for it. I find it offensive. Sex work is not the paid version of sex.

There is a reason it’s called sex work: you are providing a service, a sexual experience, it’s about them and not you. When you have sex it’s about both of your sexual needs and desires, when you do sex work it’s primarily theirs. That doesn’t mean you can’t have great sex when you work, but the primary focus is on their desires.

I see many similarities between sex work and therapy. Both are very intimate on a psychological level, but constrained by time and place. When I’m with a patient I open my head and heart to them, I focus my empathy on them and let them in. Sex workers do the same thing, create an emotional connection, get into their head and their feelings. I often feel genuine affection for my patients, and sex workers for their clients. Both are a paid relationship, and are temporary. I wouldn’t listen to them for 45 minutes if I didn’t get paid to do it, a sex worker would not meet a client for a session if there was no money involved. Both are one-sided interactions: my therapeutic relationship is not about me and my emotional needs. It’s about them and what I can provide for them. That does not mean I don’t enjoy our contact, I often do, and I don’t cross any boundaries I don’t feel comfortable with. In sex work it’s the same, it’s not about you, it’s about them, although you can enjoy being with your client and always protect your boundaries, the interaction is about them. It’s a form of paid intimacy, and I love that I’m being paid to share something like that with others :).

But a good friend is not an amateur therapist. Listening to a loved one is not the ‘free’ version of what I do for a living, when I patiently support a friend through a rough patch I’m not ‘giving it away for free’.

Sex work, like therapy work, is an actual job with skills and responsibilities, not just a paid version of what everyone else gives away for free.